We are thrilled to announce our chief executive Michael Pemberton is among the finalists at a prestigious awards ceremony which salutes people using their army experience to make a difference.

A record-breaking 700 nominations were received for the 2022 British Ex-Forces in Business Awards – the world’s largest and leading celebration of military veterans in second careers.

And we are delighted to confirm for a second consecutive year our CEO Michael is among the finalists – shortlisted in the Business Leader of The Year (SME) category.

The high-profile annual programme and event uncovers the achievements of ex-military, presenting them as important role models for current and future service leavers.

His place at the glittering event in London on September 8 which showcases the huge breadth of ex-forces talent, comes after judges received a submission outlining Michael’s commitment to using his military-gained skills and values for the benefit of BEC and the wider Cumbria community.

The judging panel heard Michael joined BEC in 2015 as the companies Chief Executive Officer and has helped its continued growth and reputation as a highly respected and values led property development company.

Michael served as a Royal Logistic Corps (RLC) Officer and was deployed on operations to Iraq and Afghanistan.

Officers in the RLC command a team of up to 80 soldiers undertaking a variety of crucial roles at home and abroad in every theatre of operations and in every military unit – crucially becoming an expert in leadership and management.

And Michael proudly continues to serve as a RLC Reserve Officer for the 167 Regiment – as well as his other voluntary roles including Chairman of Age UK West Cumbria and Non-Executive Director for Derwent Forest Development Consortium.

He holds a Degree in Executive Management and many professional awards for his contribution to his work and communities and recently graduated from Common Purpose ‘Global Leadership Programme’.

Delighted Michael said: “My desire to support soldiers to be the very best they can be is undiminished and it is great I can continue my military involvement alongside my job at BEC. I am passionate about using my experience to help communities and have a positive impact upon younger lives.

“So to be shortlisted for this prestigious award is a true honour. However you are only as good as your team, and I am amazed daily at the dedicated and brilliant team we have at BEC.”

The Awards programme serves as a powerful vehicle for increasing visibility of both role models and career opportunities for veterans and educating employers on the exceptional transferable talents among military service leavers.

At the final broadcaster Jacqui Oatley MBE will welcome over 1,000 business and military leaders to the Grosvenor House hotel’s prestigious Great Room on Park Lane.

Congratulating the finalists, Lt. Gen. Sir Andrew Gregory, CEO at SSAFA, official charity partner of the awards, said: “SSAFA, the Armed Forces charity, is extremely proud and grateful to be the official charity partner of this fine event that celebrates veteran employment and helps to increase visibility of business role models for servicemen and women. It is heartening to see such a large volume and breadth of employers acknowledging the skills and values of those who have served their country.” 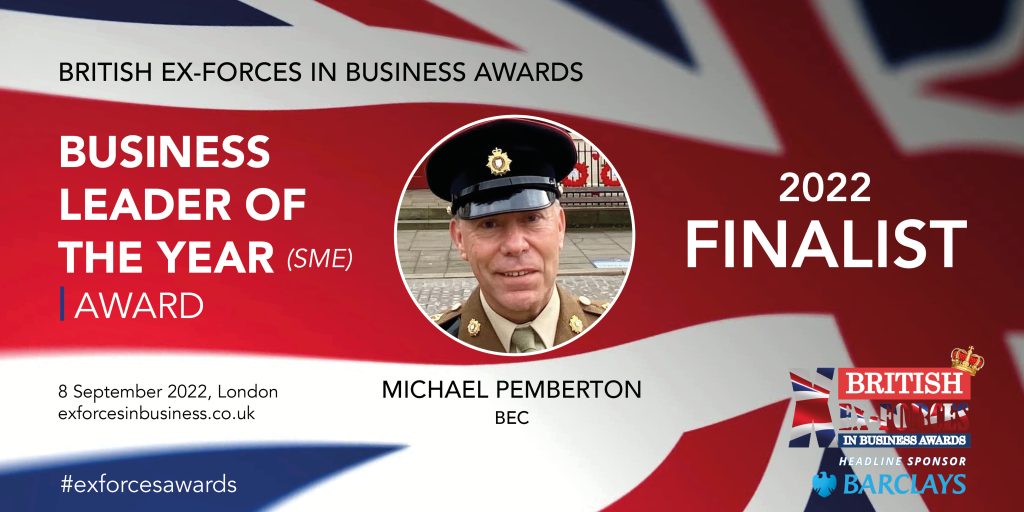