We are thrilled to announce that our Chief Executive, Michael Pemberton is a finalist in the British Ex-Forces in Business Awards.

Michael has an innate desire to support soldiers to be the very best they can be, provide for communities and have a positive impact upon younger lives and has maintained his connection to our armed forces by re-enlisting as a Reserve Officer for 167 Regiment Royal Logistics Corps.  Michael is currently Officer Commanding for 112 Squadron based out of Prince William of Gloucester Barracks, Grantham. 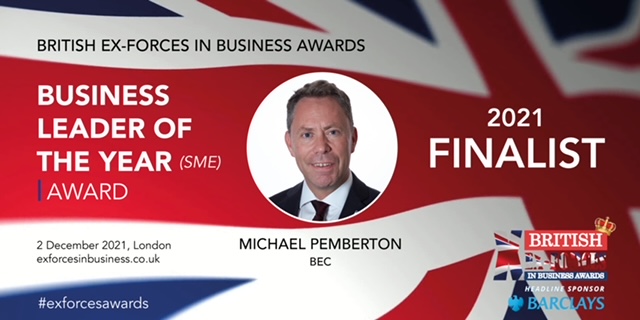 Click here to learn more about the British Ex-Forces in Business Awards.

Michael said: “I’m overjoyed to be involved in an event that showcases those that have served in our armed forces.  I feel undeserving of this accolade when I consider the many incredible things others have gone on to in business and communities.  Fundamental to life in this special family are the values – courage, discipline, respect for others, integrity, loyalty, and selfless commitment.  Values that have shaped my life and the way I live.  It’s our collective impact and commitment to a shared purpose that really makes a difference.  Our communities are a better place because of the efforts of those that have shared the honour of serving our country.”

The return of the world’s largest business celebration of the veterans community, for its fourth annual outing, showcases the huge value to employers that hire service leavers.

LONDON, 1 November: The finalists for the 2021 British Ex-Forces in Business Awards, the world’s largest celebration of veterans in second careers, are revealed today following a record number of nominations for the flagship recognition programme.

Since launching in 2018, the prestigious awards initiative, of which BFBS is a media partner, has played a prominent role in eradicating the negative misconceptions that disadvantage veterans in the workplace. In a study by SSAFA, the Armed Forces charity, a third of UK hirers said they’d feel reluctant hiring someone who served in the military, and just 48% of workers said they would feel comfortable working with a service leaver.

As the biggest platform for showcasing the exceptional talent pool formed by the thousands of people who leave the Armed Forces each year, the Ex-Forces in Business Awards cultivate a far more positive veterans narrative to the business community. By showing how military skills and values help enable business success, they demonstrate the strong value employers gain by supporting the transition of servicemen and women.

The Awards programme is also a powerful vehicle for increasing visibility of both role models and career opportunities for service leavers. This year’s UK shortlist exhibits the second-career achievements of over 180 veterans and reservists, whittled down from a record-breaking 600 nominations. The sheer breadth of opportunities available to veterans are displayed through the large variety of sectors represented on the shortlist.

Lt. Gen. Sir Andrew Gregory, CEO at SSAFA, Official Charity Partner of the Awards, said: “Many congratulations to everybody who has been shortlisted for the 2021 British Ex-Forces in Business Awards. SSAFA, the Armed Forces charity, is very proud to be associated with this important programme, which celebrates veteran employment and increases visibility of business role models for servicemen and women.

“As a former Chief of Defence People, and now Chief Executive at an Armed Forces charity which operates a mentoring scheme amongst other vital services, I am very aware of the challenges that can be faced by service leavers during their transition, and role models are crucial. It is heartening to see such a large volume and breadth of employers acknowledging the skills and values of those who have served their country.”

The winners of this year’s British Ex-Forces in Business Awards will be announced and celebrated at a glittering ceremony on 2 December, taking place in the InterContinental London – The O2. In attendance will be over 1,000 business and military leaders, expected to represent over 400 UK employers. Jacqui Oatley MBE will host the ceremony, as well as introducing a programme of live entertainment and special guest speakers including the double Olympic rowing champion Major Heather Stanning OBE.

“Having recruited over 600 veterans and supported thousands more through both our AFTER and VETS programmes, we are fully aware of how beneficial military-gained skills and values are and Barclays is a better business because of our veteran colleagues.

“These Awards play a crucial role in promoting the huge value that ex-forces personnel add in their second careers, both to their individual employers and to the economy as a whole. It is wonderful to see the veterans community come together in force and I have no doubt this outstanding talent pool will play a vital role in the UK’s economic rebound.”